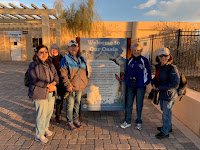 The club went on a Photo Walk On February 12th to Henderson Bird Preserve. Luise Brown, Helen Delahunt, Dale Kavula, Cindy Lawrence, Sue Stevens and Maria Riach were the hardy souls to get up early on a cold morning to photograph the many variety of birds.This is a hidden oasis for all types of birds at any season of the year. 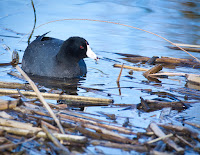 The six of up walked around the nine pools of water on paths with special viewing areas and a boardwalk to get better close up shots.

We even, as a bonus, were able to spot and photograph an owl which was an unexpected attraction.

After a beautiful morning, we set out for Hemenway Park in Henderson to photograph the big horn sheep. We arrived there mid to late morning and the park was empty of sheep so as the fun people we decided to go to lunch and come back. The sheep didn’t appear, so this will give us opportunity to enjoy another outing to the park with new found friends of the Sun City Photography Club of fellow photographers.