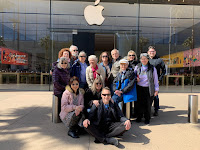 
We held our February Photo Walk on Saturday the 23rd, in cooperation with the Downtown Summerlin Apple Store.

This year the theme was “Portraits.”

The Apple Store loaned new iPhones to interested club members for their use during the session. The leader, Daniel, and his assistant started with an illustrated pre-walk discussion inside the store. The most important features of iPhone photography were reviewed. Some questions about smart phone photography in general were covered, followed by specific pointers on portrait photography for any camera.

Next, we headed outdoors for a stroll through Downtown Summerlin. Because our walk this year took place during regular store hours (last year it was before the store opened), we were accompanied by several non-SCS Photo Club members who joined us at the Apple Store.

During the walk we stopped at various spots so Daniel could demo backgrounds, lighting effects, etc. for portraits. We were encouraged to try our own photos utilizing the techniques discussed. Later, as we approached the Farmers’ Market, we split off into smaller groups to seek our own subjects, compositions and portrait styles.
Finally we returned to the Apple Store where club members contributed photos from the walk to a big screen slide show and, ultimately, a collage. There were many excellent photos! Comments from the Apple staff and club members were so interesting that the session ran overtime.

In conclusion, here are a few words from one of the participants, Helen Delahunt:
“It was another great Apple Store walk! I thoroughly enjoyed [it] and learned from Daniel - who was so knowledgeable!" ….

Posted by Joyce Lindsey O'Keefe at 9:23 AM