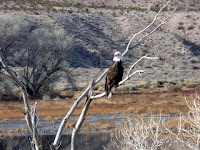 Don received a notice that the eagles had landed at the Pahranagat National Wildlife Refuge the last week in December. We quickly got the word out to members who might want to take an impromptu field trip. On Saturday, December 30 Don, Diane, J, and I were able to make the expedition.

After a brief primer on eagles and Pahranagat by Barbara Michel, nature educator at the visitor's center, spotters had pointed out some locations where eagles were perched. Here is a sampling of the photos taken.

Click here to view the album in Google Photos.
Posted by D.M. Filangeri at 9:51 AM